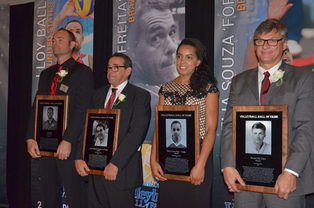 The foursome, elected via a vote of current Volleyball Hall of Fame inductees, enter as the 30th induction class that now represents 125 total inductees from 21 different countries.

“It is an honor to have Lloy, Bebeto, Fofão and Renan join the International Volleyball Hall of Fame family as part of this year’s legendary induction class,” Volleyball Hall of Fame Executive Director George Mulry said. “This diverse group of legendary players have 16 Olympic Games appearances and a coach who led his team to an Olympic Games silver medal. These remarkable individuals have brought distinction to the sport over a number of years and we are humbled to honor them here in Holyoke, the birthplace of volleyball.”

“I am so blessed to have role models like my sisters, mother and father, and they are the reason why I am here today, not because of volleyball, but the husband and father that I hope to become in what they have taught me,” Ball said. “I am blessed to have a coach and a hero as a father. I am very blessed to have a wife who has sacrificed everything to allow me to do what I love. I am blessed that my children got to see me play and win a gold medal.”

“I am blessed to have seen at a young age what the next level looks like,” Ball said. “Not many kids get a chance to have Bill Neville pluck you out of high school and take you to Japan. Not many kids at 15 are plucked to play in the Olympic Festival and play against college athletes. Blessed to have great teammates. It is awesome to see Ryan Millar here, one of many guys who I was so lucky to play with, battle with, wins and losses. They don’t define us, but the things we do afterwards do. Blessed to see the world, and so many amazing experiences, meet so many amazing people and special experiences as this one tonight. It is awesome to see all these faces of past inductees, many who I have been blessed to play with and blessed to call friends. The world of volleyball is a small, but loved community.

“I am very blessed that my bad decisions didn’t ruin me and that my good decisions defined me,” Ball continued. “A lot of times in our career, we make bad decisions. Luckily those who I talked about supporting me earlier, didn’t give up on me and continued to let me grow up and mature.”

“I am very happy to be here tonight and see my name alongside great personalities of world volleyball,” Renan said. “I never imagined this could happen. I would like to thank all my friends and I had an opportunity to play among many great athletes including my great friend Bebeto. In the 80s, we were the first Brazilian group to win an Olympic medal at the 1984 Olympics in Los Angeles. In this moment, I know that I am representing each one of them at this beautiful party and I want them to feel honored and celebrated as I am here. With this generation we had many accomplishments, many victories but many losses. Probably more losses than victories. But one thing we were sure. Anytime we went to the court, we would do our best.”

Fofão became the first volleyball player to play in five Olympic Games that spanned the years from 1992 to 2008. As its setter, she led Brazil to its first-ever Olympic Games women’s volleyball gold medal in 2008 after securing bronze in 1996 and 2000. She was selected Best Setter at the conclusion of the 2008 Olympic Games. Fofão collected silver medals at three FIVB World Championship events in 1994, 2006 and 2010. She earned silver medals at both the 2003 and 2007 FIVB World Cups, which included being honored as Best Setter in the 2007 event.

“I am living one of the biggest moments that every athlete in life wants to get,” Fofão said. “When I started, I didn’t know where I would end and now looking back, look where I am. It was a long way with a lot of difficulties. The challenge that I faced was worth it as it required a lot of hard work. I didn’t think I would be playing this sport for 30 years, and for 17 years I wore the Brazilian jersey.

“I lived all types of emotions – I cried, I laughed, I got injured, I scream, but beyond that I also and had fun,” Fofão continued. My dad, Mr. Sebastian, was the one who support me throughout my life. Unfortunately, he is not among us anymore, but he was the one that incentivized me to keep going on throughout my career. He believed in me more than I believed in myself. He said that I would not win only if I didn’t want to. I grew up believing in this every single day, and I am pretty sure he is pretty proud of what his daughter has accomplished.”

Bebeto coached the Brazil men’s national team to the 1984 Olympic Games silver medal in Los Angeles. He served as Brazil’s head coach during two tenures from 1980-84 and 1987-90. After his second tenure with Brazil, Bebeto moved on to coach Maxicono Parma in the Italian Serie A1 from 1990 to 1996. He accepted the head coaching position with the Italian men’s national team from 1996-99, leading Italy to the FIVB World Championship title in 1998.

“After I finally seen the Hall of Fame today I had a surprise joy, honor and a feeling my job was done,” Bebeto said. “After that I developed another feeling. The responsibility to play with people who have seen played, played against and also one of my idols. It is a great honor to be here. I don’t know how many times I have seen them playing in my dreams, and coaches who have influenced me the most on my understanding of volleyball. I think my volleyball, not because a feeling of ownership, but I believe as a coach you need your own style, your values and strategies to play the sport. There is no copy or imitation. You need your own style. I have reached the same honor that many of my heroes have here today in my volleyball.”

“This year’s class represents the stars of the game from three decades,” said Al Monaco, co-chair of the Volleyball Hall of Fame Selection Committee. “The group includes five-time volleyball Olympian in Fofão, plus Lloy Ball who played in four Olympics and Renan who played in three Olympics. Bebeto was one of the top coaches during his time for Brazil and later Italy. It will be another remarkable October evening as we induct these four individuals into the International Volleyball Hall of Fame.”

“I would like to thank the Hall of Fame and all who are involved with this moment who treat volleyball with so much care and love, making us feel special and making us believe that everything that we have done for volleyball was worth it,” Fofão said.

All the inductees talked about representing their country, and in Bebeto’s case, how hard it is to represent someone else’s country as its head coach.

“I am blessed to represent my country,” Ball said. “Wearing USA means a lot to my family. We are so blessed to have many in our family who served in the military. While I never got the call to do that, I consider the USA on my chest when I am playing as something I'm very proud of.”

The Greater Holyoke Chamber of Commerce was selected as the Court of Honor recipient for 2015.

The Induction Gala Dinner and Ceremony, presented by Spalding, is part of a two-day calendar of events recognizing the four individuals along with the special Court of Honor representatives. On Friday evening, the four inductees attended an invite-only Mayor’s Reception, presented by the Dowd Agencies, at the historic Wistariahurst Museum in Holyoke. Earlier on Saturday the inductees took part in the Ring and Plaque Ceremony presented by Holyoke Medical Center at the Volleyball Hall of Fame Exhibit Hall. Prior to the Induction Gala Dinner and Ceremony, Mizuno presented a cocktail hour Induction Meet and Greet for the public to interact with the inductees. The induction weekend was capped by an Induction After-Party at Open Square with live entertainment and socializing with the honorees.