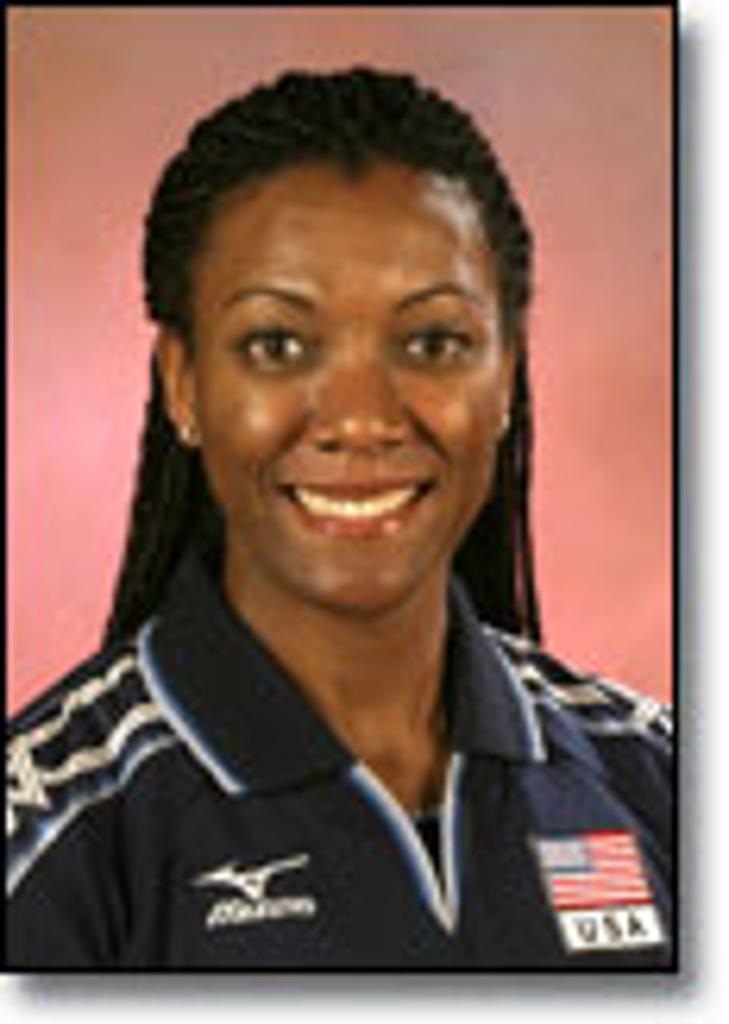 Danielle Scott-Arruda’s ability to sustain excellence over an extraordinary length of time at the highest levels has warranted her a spot among the all-time greats of the game.

Before starring on the U.S. Women’s National Volleyball Team as a middle blocker for 19 years, Danielle played collegiately at Long Beach State University where she was a three-time American Volleyball Coaches Association All-American First-Team. She ended her career as the NCAA leader in career hitting efficiency at .421. Danielle led the 49ers to the NCAA title as a senior in 1993 when she earned three major postseason awards – AVCA and Volleyball Magazine Player of the Year and the Honda Award as the nation’s best female volleyball player. That same year, she earned All-Big West Conference in basketball to become the first player to earn all-conference accolades in two sports in one season.

Danielle joined the U.S. Women’s National Team on a full-time basis in 1994, making her international debut at the Goodwill Games and played in her first of three FIVB World Championships. In 1995, she helped Team USA win its first-ever FIVB World Grand Prix title with extensive time off the bench. After biding her time as a key reserve in her first two years, Danielle was selected to her first of five consecutive Olympics – the 1996 Atlanta Games where she started the final two matches.

Four years later, Danielle became a veteran leader on a rather young 2000 Olympic Team that finished fourth in Sydney. She was named Best Blocker of the 2000 Olympics where she had 33 blocks as part of her 139 total points.

Danielle carried that success through the rest of the decade with multiple medals and individual honors. She sparked the Americans to the 2001 FIVB World Grand Prix title as she was honored with the most valuable player award, Best Scorer and Best Blocker awards. In the following year, Danielle led the U.S. to the 2002 FIVB World Championship silver medal as she was named Best Blocker. She paced Team USA to the bronze medal at the 2003 FIVB World Cup where the Americans qualified for the 2004 Olympics. At the Athens Games, Danielle was seventh overall in blocking despite the USA’s disappointing knockout in the quarterfinals.

Following the Athens Games, she helped a resurgent Team USA in 2007 following two years of middling results. Danielle was named as flag bearer to lead the Team USA delegation at the 2007 Pan American Games in Rio, where the young USA roster finished with the bronze medal. Later that year, the Americans qualified for the 2008 Olympic Games by finishing third at the 2007 FIVB World Cup and Danielle finished third in blocking. Team USA’s late quadrennial momentum continued in 2008 as Danielle and her overachieving teammates found themselves in the Beijing Olympic Games final against Brazil before taking home the silver medal – the team’s first Olympic medal since 1992.

After missing all of 2010 while pregnant with her daughter Julianne, Danielle worked herself back into shape and was a key performer off the bench to help Team USA win gold at the 2011 FIVB World Grand Prix and silver at the 2011 FIVB World Cup, thus again earning a berth into the 2012 Olympics. Based on her strong efforts starting eight of 14 matches of the 2012 FIVB World Grand Prix leading to her fifth gold in that event, Danielle was selected to her fifth Olympic Games at the age of 39. As a reserve middle playing six sets in the London Games, she provided a veteran presence for the Americans to finish with the 2012 Olympic silver medal, losing only to Brazil in the finals.

Danielle’s second-to-last appearance wearing the Red, White and Blue was in 2013, playing in the inaugural USA Volleyball Cup against Japan on June 12 at Long Beach State where she played collegiately. Since then, she has been an integral part of USA Volleyball’s High Performance pipeline coaching the next generation of aspiring Olympians.

Danielle is one of only four volleyball players – male or female – to have participated in five Olympic Games. Russia’s Yevgeniya Artamonova-Estes and Sergey Tetyukhin played in a remarkable six Olympics, while Brazilian and 2015 International Volleyball Hall of Fame inductee Fofão competed in five Olympics. And what makes Danielle’s five Olympics even more impressive is that she played under five different head coaches with five different systems.

For her international career that spanned 19 years, over 420 international matches and five Olympic Games appearances with two silver medals, we are proud to induct Danielle Scott-Arruda into the International Volleyball Hall of Fame as an indoor player.