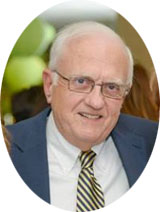 Biography (Current at time of award):
Francis G. Hamel, Fran as we know him, has been a strong supporter of the Volleyball Hall of Fame for more than 2 decades.

He is now officially an Honorary Board Member but maintains an active role in Hall activities including bringing financial support to Hall activities and hosting international visitors.

Fran has been instrumental in shepherding the Hall of Fame - Spalding relationship over the years throughout the corporate changes that have occurred. A 35 year Spalding employee, Fran has been key to the 20+ year support of Spalding as a major Induction Sponsor.

He has helped make numerous international connections through his world-wide network at Spalding such as assisting with contact of the family of 2008 Honoree Sinan Erdem of Turkey when efforts through normal channels were fruitless.

Fran & Spalding were also instrumental in the start up of the Volleyball Hall of Fame's Showcase of Champions High School Invitational tournament for both boys and girls following many years of support for our collegiate men's Morgan Classic Tournament & Clinic and the Hall of Fame Women's Invitational.

A retired International Credit Manager at Spalding, Fran enjoys time with his wife Pat and children Jennifer and Jeff and grandchildren Jack, Lucas, Quinn, Chase and Ella. Fran is also active in the community including membership in the Beavers Businessmen's Club.