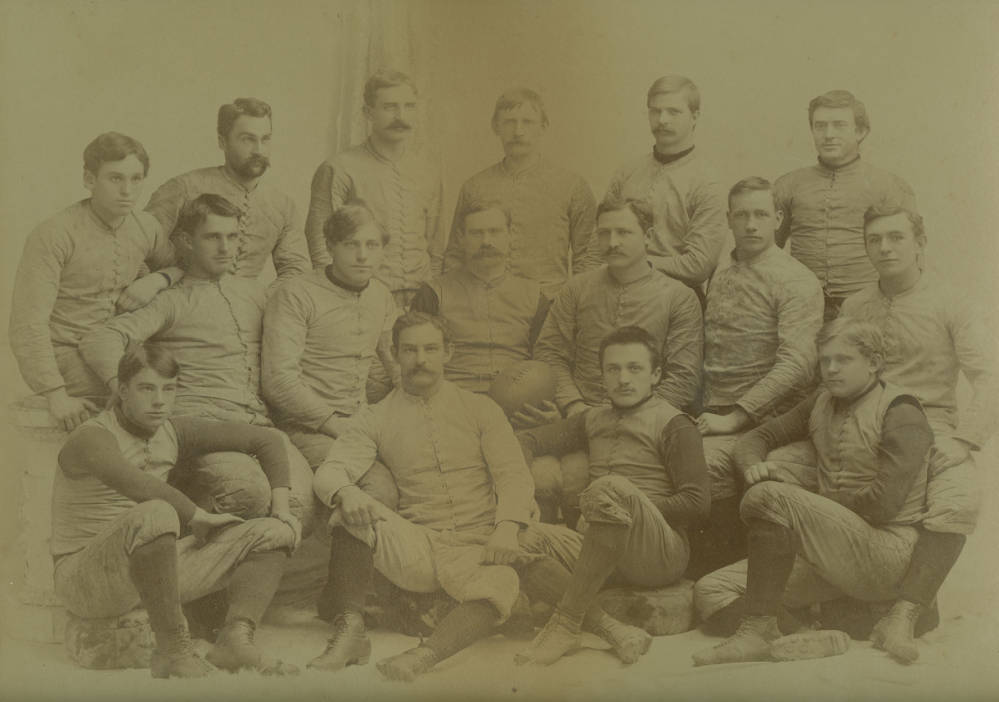 As Naismith, a second-year graduate student who had been named to the teaching faculty, looked at his class, his mind flashed to the summer session of 1891, when Gulick introduced a new course in the psychology of play. In class discussions, Gulick had stressed the need for a new indoor game, one “that would be interesting, easy to learn, and easy to play in the winter and by artificial light.” No one in the class had followed up on Gulick’s challenge to invent such a game. But now, faced with the end of the fall sports season and students dreading the mandatory and dull required gymnasium work, Naismith had a new motivation.
Two instructors had already tried and failed to devise activities that would interest the young men. The faculty had met to discuss what was becoming a persistent problem with the class’s unbridled energy and disinterest in required work.

During the meeting, Naismith later wrote that he had expressed his opinion that “the trouble is not with the men, but with the system that we are using.” He felt that the kind of work needed to motivate and inspire the young men he faced “should be of a recreative nature, something that would appeal to their play instincts.”

Before the end of the faculty meeting, Gulick placed the problem squarely in Naismith’s lap.

“Naismith,” he said. “I want you to take that class and see what you can do with it.”

So Naismith went to work. His charge was to create a game that was easy to assimilate, yet complex enough to be interesting. It had to be playable indoors or on any kind of ground, and by a large number of players all at once. It should provide plenty of exercise, yet without the roughness of football, soccer, or rugby since those would threaten bruises and broken bones if played in a confined space.

Much time and thought went into this new creation. It became an adaptation of many games of its time, including American rugby (passing), English rugby (the jump ball), lacrosse (use of a goal), soccer (the shape and size of the ball), and something called duck on a rock, a game Naismith had played with his childhood friends in Bennie’s Corners, Ontario. Duck on a rock used a ball and a goal that could not be rushed. The goal could not be slammed through, thus necessitating “a goal with a horizontal opening high enough so that the ball would have to be tossed into it, rather than being thrown.”

Naismith approached the school janitor, hoping he could find two, 18-inch square boxes to use as goals. The janitor came back with two peach baskets instead. Naismith then nailed them to the lower rail of the gymnasium balcony, one at each end. The height of that lower balcony rail happened to be ten feet. A man was stationed at each end of the balcony to pick the ball from the basket and put it back into play. It wasn’t until a few years later that the bottoms of those peach baskets were cut to let the ball fall loose.
​
Naismith then drew up the 13 original rules, which described, among other facets, the method of moving the ball and what constituted a foul. A referee was appointed. The game would be divided into two, 15-minute halves with a five-minute resting period in between. Naismith’s secretary typed up the rules and tacked them on the bulletin board. A short time later, the gym class met, and the teams were chosen with three centers, three forwards, and three guards per side. Two of the centers met at mid-court, Naismith tossed the ball, and the game of “basket ball” was born.
WHERE WAS BASKETBALL INVENTED?
BASKETBALL AND THE OLYMPIC GAMES
Naismith was 75 when he saw his sport make its Olympic debut in Berlin in 1936 and he was accorded the honor of throwing the jump ball at the opening match between France and Estonia. The tournament was held on outdoor courts and was won by the USA, who beat Canada 19-8 in a final played in very muddy conditions following prolonged heavy rain. The sport’s inventor was also asked to present the medals.

Over the following two decades, basketball’s growth was exponential. The USA’s professional basketball league, the NBA, was founded in 1946, while the first International Basketball Federation (FIBA) men’s world championships were held in 1950, and the women’s three years later.

The USA won every Olympic tournament through to Munich 1972, when the USSR beat them to gold. Yugoslavia would take the title at Moscow 1980, while the Soviets returned to the top of the podium in Seoul eight years later. Professional athletes were admitted in most sports at Barcelona 1992, where the USA’s all-star Dream Team blew away the opposition and re-established American supremacy on the court.

Women’s basketball was added to the Olympic program at Montreal 1976. The USSR won the first two gold medals in the event before the USA embarked on a victorious streak which has only once been interrupted – by the “Unified Team” which competed in Barcelona in 1992 (as a temporary successor to the USSR).

The sport continues to experiment with exciting new formats;  3x3 basketball, a fast-paced variation of the game, debuted at the Youth Olympic Games Singapore 2010 and will join the official program at Tokyo 2020.